A story lost in time, embroiled in myth, enshrined in legends, the knowledge of Atlantis has been passed down through millennia. From the ancient times of Plato and Aristotle, Atlantis has been talked about, thought about, written about, discussed and searched for, possibly more than any other place, mythical or real. And yet, the very mention of the place is considered intellectual suicide, an open invitation to ridicule.

Books on the subject can be found next to books about UFOs, big-foot, or the Bermuda triangle. You certainly will not find anything relevant in the history section of a bookshop, although Atlantis is defiantly a part of humanities cultural heritage, at least as far back as Plato.

One of the first, if not the first, mention of Atlantis in literature, is in the work 'Timaeus and Critias', an unfinished trilogy, written by Socrates's most famous pupil, Plato. One of Plato's later works, it consists of two sections of dialogue, the first, Timaeus, is a dialogue which begins with the description of a hypothetical ideal society, which they then argue, needs a real historical setting in which to place it. In the second part of the work 'Critias', Plato's character remembers a story told to him by the most respected of scholars Solon, many years before, about a place that existed many thousands of years ago, a place called Atlantis.

For centuries, some have argued that the writer invented a purely imaginary place, in which to base his hypothetical society; while others insist Plato treats this part of his narrative as though it were real history, giving many details, which while they may be historically interesting, are irrelevant to the scene which Critias is trying to set, in which to place his ideal society.

The story begins with Critias, the grandfather of Plato, recounting from where he heard the story, many years ago, when he was still a boy, from his grandfather, who had had it passed on from the great Solon. Now Solon was not a man to pop into your story for no particular reason. he was considered on the the greatest of all Athenians, he was the man who had repealed almost all the laws originally written by Draco, from where the word draconian comes from, and then promptly popped of to Egypt, where he met the Egyptian Priest, Sonchis of Sais, who told him of a civilization which was destroyed by a flood 9,000 years earlier.

Since the date we have for Solon is 600BCE, this dates the flood myth to 9,600BCE - or 11,600 years ago, a date which coincides almost exactly with the end of the last ice age, (the Pleistocene epoch) and begging of the Holocene, the start of which is generally dated to approximately 11,700 ago. The last ice age began 125,000 years ago, and reached it's glacial maximum about 21,000 years ago. a point where ice two miles thick covered much of North America and much of Northern Europe, an amount of frozen water taken from the sea left sea levels some 400 feet below present levels, giving an extra ten million square miles of land that are currently underwater.

Plato's account then, dates the flooding of Atlantis to right around the time of the end of the last ice age. At a time when the ice sheets of North America and Northern Europe were rapidly melting, forming gigantic melt pools, which, presumably due to earth tremors, or to volcanism, appear to have spilled out simultaneously, inundating very many coastal areas by thirty or 40 feet almost overnight, and causing the thousands of ancient flood myths which cover the entire globe - one of the most famous being that of Atlantis.

But why should the story be so contraversial? We know for a fact other places, other communities were submerged by rising sea levels - at around the same time! Doggerland is one well documented example. Now situated deep below the north sea, it was at one time a land bridge between France and England. As the ice age came to an end, melting ice caused sea levels to rise, cutting off Britain from the continant, and leaving a few scattered islands, that were possibly finally submerged by a tsunami caused by the Storegga Slide, a massive underwater landslide that happened around 8,000 years ago.

The location of Doggerland - Shown in bright green (Bradford University) 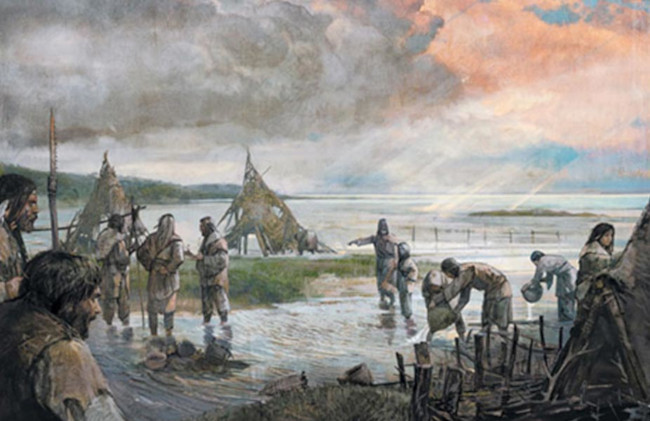 Why should one submerged community be studied and accepted by the scientific community, and another be ridiculed?

One of the main reasons would seem to be that, although the civilization of Atlantis has, unlike doggerland, lived on in mankinds folklore, it has never been found. And up until recently, the most probable location, ie. somewhere in the carrabean, was thought to have been undiscovered, unknown, and unexplored until Columbus reached the new continent in 1992.

We now know of course that America was known to variouse European communities well before this. The Earl of Orkney Henry Sinclair, is reputed to have beaten Columbus too it, by a number of years. Viking settlements have been found in various locations along the coast. Traces of cocaine, cannabis, and nicotine, have been found in ancient Egyptian mummies, substances that could only have come from America!

The gigantic 11,000 year old structure at Gobekli Tepe - generally supposed to be a temple.(Smithsonianmag.com)

The earliest stuctures at the Gobekli Tepe site date to around 11,000 years ago, which is the very same date Plato gives for the destruction of atlantis!

Could Gobekli Tepe be a a structure erected by survivors of Atlantis? Or perhaps he civilization that built this gigantic ancient structure were able to sail to America and learn of a mysterious submerged civilization. Or perhaps it was the ancent Egyptians themselves that, on travelling to America, heard stories from the indiginous population they traded with, of a magnificant bygone island culture, of enlightenment and illumination, a civilizationthat sank beneath the waves many millenia before.

Following the catastrophe, many of those who escaped fled to the four corners of the earth.

Escaping on ships, some large, some nothing more than improvised rafts, the survivors travelled to new lands. Those who could, steered towards the most desirable places on earth to establish their new homes, others drifted where the currents took them.

All of them took with them their memories of the mighty Atlantis, knowledge of their science - and their religion.

Said by some to have magical properties, Atlantean sand is one of the most treasured minerals known to man.

Although mostly dispersed among the seas and oceans, some of this mythical substance is said to have survived the catastrophe.

While some is undoubtedly in the hands of collectors, the largest reserves are to be found below the waves, on the beaches of what remains of the once mighty Atlantis.